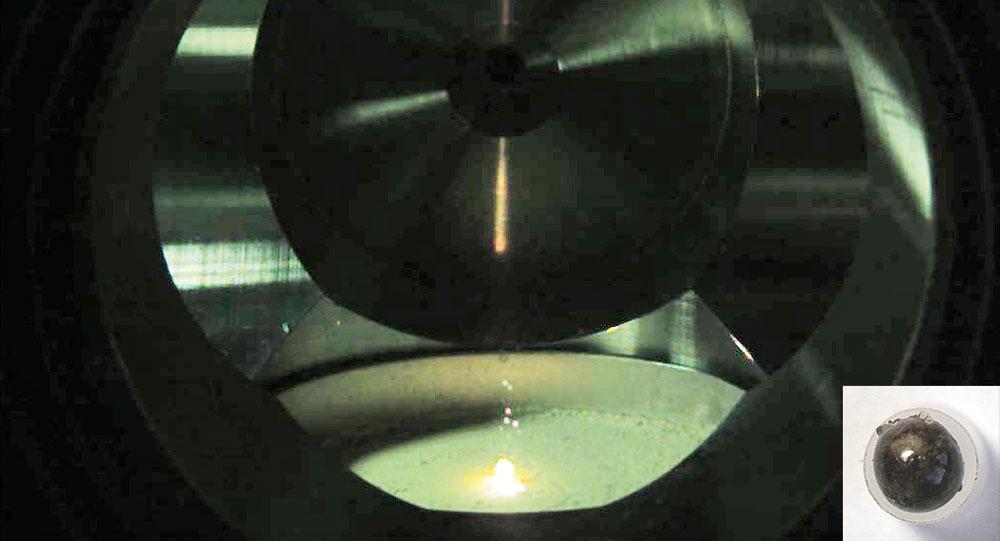 The spheres appear inconspicuous – but they are unique. They consist of moon dust, molten under moon gravity in the course of the MOONRISE project. The Laser Zentrum Hannover e.V. (LZH) together with the Institute of Space Systems (IRAS) of the Technical University of Braunschweig carried out this unique experiment in the Einstein-Elevator of the Hannover Institute of Technology (HITec) of the Leibniz University Hannover (LUH).

"With these spheres, we have come a big step closer to 3D-printing on the moon", explains Niklas Gerdes, a scientific employee of the LZH. A laser system developed by the LZH was used to melt synthetically produced lunar dust, the so-called regolith, under both lunar and microgravity.

Material samples adapted to possible landing site
IRAS scientists have compiled the material samples for the experiments. "Depending on the landing site of a possible lunar mission, the composition of the lunar dust varies," explains Prof. Dr.-Ing. Enrico Stoll from IRAS. "With our mixtures, we simulate the lunar conditions as accurately as possible. We then evaluate the quality of the melted samples so that the LZH can further improve the process".

First scientific experiment in the Einstein-Elevator
The melting of the regolith was the first scientific experiment in the new Einstein-Elevator at the LUH. To be used in the elevator, the laser system and a vacuum chamber in the gondola of the elevator have been attached to an experiment carrier. The experiment carrier supplies the laser system with power and enables the controls over the system. The regolith samples are in vacuum during the experiments – just as they would be on the moon. During the flight, the laser melts a small amount of regolith, forming a sphere that cools down before landing in the experiment chamber.

Prof. Dr.-Ing. Ludger Overmeyer, LUH, describes the unique features of the large research device from Hannover as follows: "The Einstein-Elevator is equipped with long-stator linear motors. This enables us to accelerate very precisely, precisely set a vertical trajectory, but also to brake safely. In this way, we can achieve up to 300 flight attempts per day and also varying degrees of gravity." Microgravity, i.e. weightlessness, is achieved in free fall, while lunar gravity is generated when the elevator is slowed down. "This is unique to date and makes it possible to carry out statistical tests in different gravitational environments," explains Prof. Dr.-Ing. Overmeyer.

Vision: Printing building materials on the moon
"The next goal is now to test the laser system on a lunar mission," says Stefan Linke, IRAS. "If the laser system can be used to melt regolith on the moon, 3D-printed construction material on the moon will come closer and with it the realization of the vision of a lunar colony".

About MOONRISE
The Volkswagen Foundation supports the ambitious and future-oriented research project within the “Off the Beaten Track" funding initiative. The foundation supports extraordinary and daring projects for which no other financing can be found. The MOONRISE film depicts the idea behind the project and the current progress.

About the Einstein-Elevator
The Einstein-Elevator at the Hannover Institute of Technology of Leibniz University Hannover is an actively controlled drop tower of a new generation. It enables experiments in weightlessness and other gravity conditions such as lunar or Martian gravity at a repetition rate of up to 300 runs per day in a three-shift operation. The facility was commissioned in autumn 2019 and had already successfully completed its first research flights for the MOONRISE project and other research projects. The Institute of Transport and Automation Technology (ITA) works in close cooperation with the Laser Zentrum Hannover e.V. on laser-based Additive Manufacturing under space conditions. The operation of the worldwide unique facility is supervised by ITA. ITA was significantly involved in the development and construction of the Einstein-Elevator. More about the Einstein-Elevator at https://www.hitec.uni-hannover.de/en/large-scale-equipment/einstein-elevator/.

There are three figure and a video to this press release.