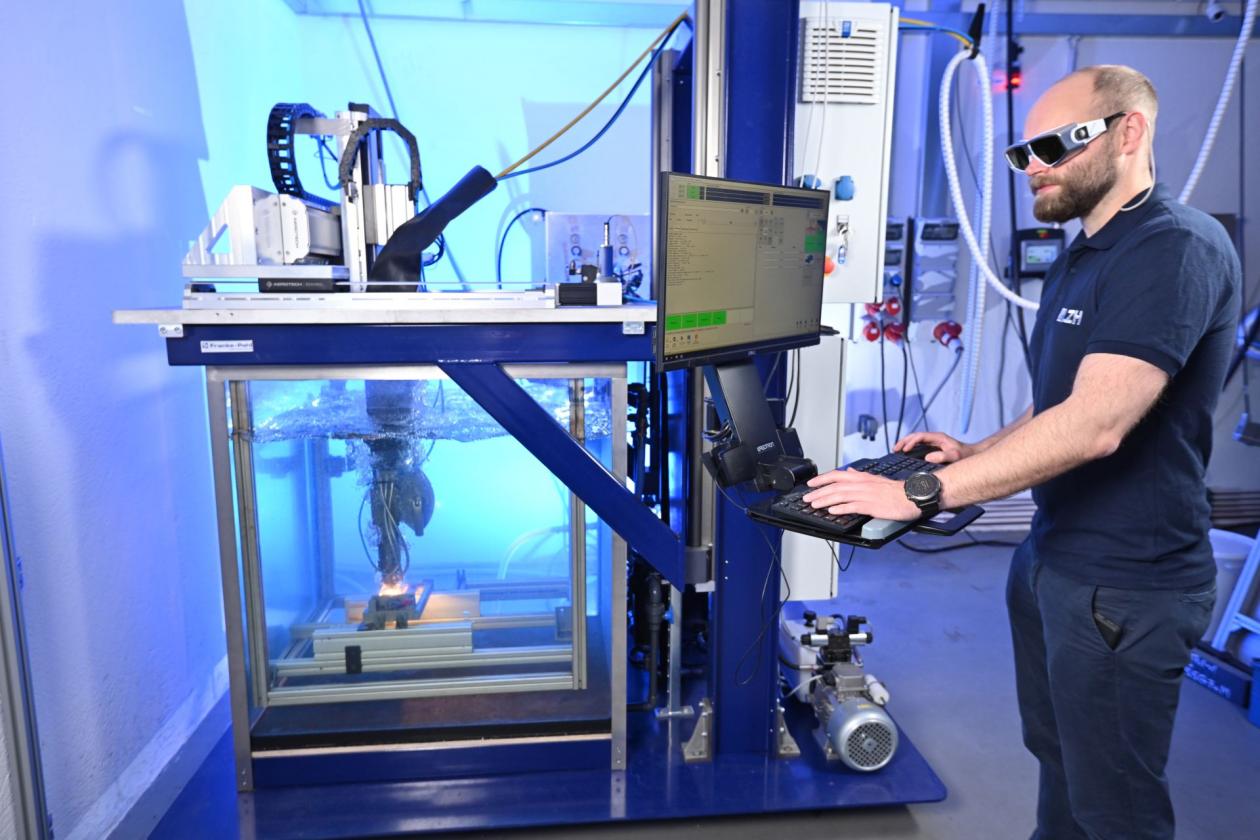 The LZH, together with project partners, is developing a process to defuse world war ammunition under water using a laser. (Photo: LZH)
Press releases

Together with project partners, the LZH is developing a process to defuse world war ammunition under water using a laser. The goal: to affect the ecosystem as little as possible while saving time and costs.

In the North and Baltic Sea, approximately 1.6 million tons of war ammunition lie on the seabed. The danger of unforeseen detonations is not the only problem. Over time, the water causes the steel shell of the explosive ordnance to corrode, releasing the explosives into the sea - with significant consequences for humans, animals and the entire ecosystem. Removing explosive ordnance, however, is a challenge: blasting underwater is not only dangerous, it also creates significant pressure waves and affects the sea dwellers that live there. Also, unreacted, environmentally harmful explosives can spread in the sea after detonation. In the project UNLOWDET, scientists of the LZH are working on a solution together with the companies LASER on demand GmbH and EGGERS Kampfmittelbergung GmbH: They are researching how to defuse explosive ordnance underwater remotely controlled by a laser. Thereby, the impact of the blasting on the environment shall be reduced.

For this, the project partners are following the approach of a "Low-Order Detonation", in which, in contrast to the "High-Order Detonation", only a small part of the explosive is reacted. In the  first step, a laser beam is used to make a defined joint in the explosive ordnance, thus weakening the shell. In the second step, a Low-Order Detonation is then to be triggered with the laser beam, so that the detonator is removed and the ignition chain is interrupted. Since the system technology is to be positioned at the explosive ordnance with a diving robot, the process can be controlled from a distance.
This method makes the process of defusing not only safer but also significantly more efficient: For example, the time-consuming and cost-intensive application of bubble curtains, which are usually used for noise protection during blasting, can be dispensed with. At the same time, the risk of unreacted explosives spreading in the sea after detonation is minimized.

In the project UNLOWDET, the partners are developing a process for laser-induced underwater Low-Order Detonation for the efficient defusing of explosive ordnance in the sea. In addition to the Laser Zentrum Hannover e.V. (LZH), EGGERS Kampfmittelbergung GmbH and LASER on demand GmbH are involved.

Associated partners advising the project are the Hamburg Fire Department, the Lower Saxony State Office for Geoinformation and Land Surveying, the Bremen Police, the Schleswig-Holstein State Criminal Police Office, the State Office for Central Police Tasks and Technology, the GEOMAR Centre for Ocean Research Kiel and the Lower Saxony Ministry for the Environment, Energy, Building and Climate Protection.

The joint research project is funded by the German Federal Ministry for Economic Affairs and Climate Action under the funding code 03SX550B by the project coordinator Jülich.