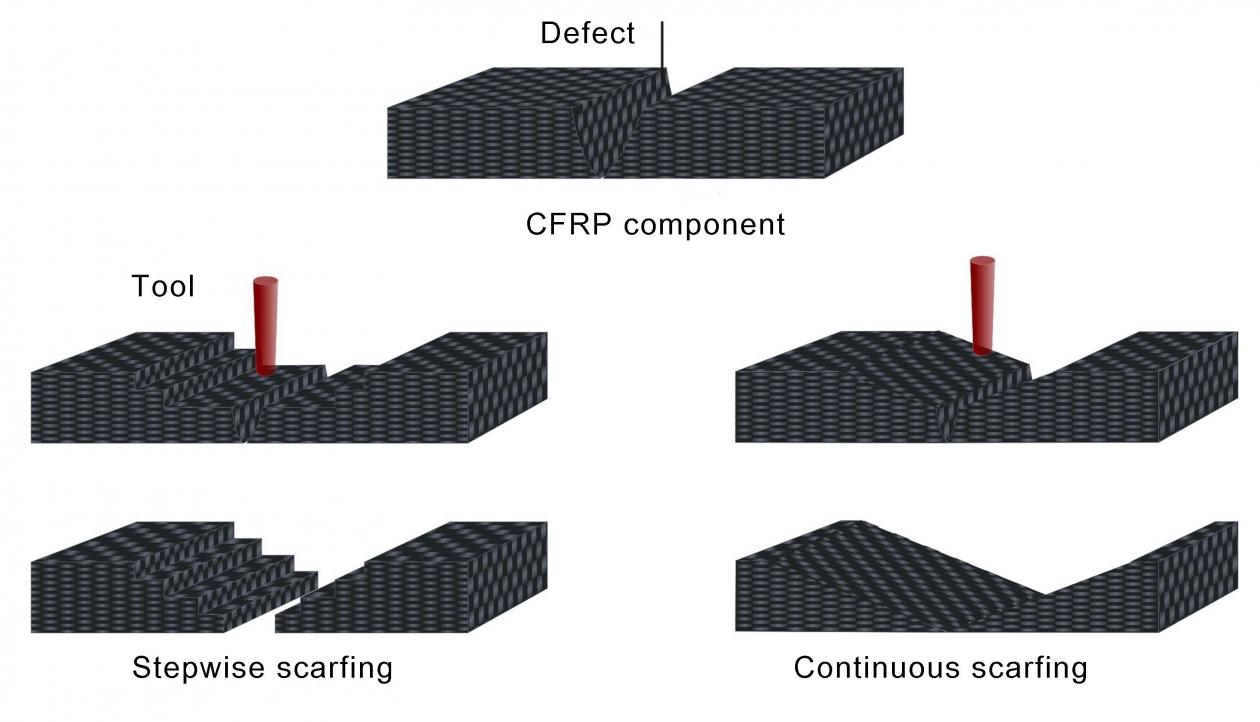 Fiber-reinforced plastics (FRP) are frequently used in the aeronautic and automobile industry. However, the repair of workpieces made of these composite materials is often less profitable than exchanging the part. In order to increase the lifetime of FRP parts and to make them more eco-efficient, the Laser Zentrum Hannover e.V. (LZH) and the Apodius GmbH want to combine a new measuring device for fiber layer orientation with an innovative laser-based repair process.

Defects in FRP pieces may be production or operation-related. Whether or not repair is cost-effective depends on the geometry of the defective area, the tools and repair process, and the automation possibilities. By using laser scarfing and subsequent patch repair, FRP pieces can be repaired with appropriate fiber orientation. The damaged material is ablated layer-by-layer either in a continuous or in a stepwise way. A precisely fitting replacement, a so called patch, is used to close the defective area. Afterwards, resin can be used to infiltrate and consolidate the new fiber layers. Thus, the repaired area become very strong.

Optical system for the detection of fiber layer orientation
The challenge in laser scarfing is a precise, non-residual removal of the damaged fiber layers. This is made more difficult by the varying thickness of the composite layers, which can be of a global, i.e. in the whole workpiece, or local, i.e. locally restricted, nature. An optical system for recognizing the fiber orientation of the exposed material is supposed provide a solution. An existing system technology from the Apodius GmbH, which is already used for the manufacturing of dry, semi-finished fiber products, is used as technical basis. Currently, these fiber orientation measuring devices are being further developed, allowing to detect varying layer thicknesses in workpieces made of fiber-reinforced materials with a plastic matrix.

Real-time evaluation enables control of the laser process
In combination with the scanner-based laser scarfing process from the LZH, the new fiber orientation measuring unit achieves a higher geometrical resolution than that of mechanical ablation processes. “Due to the speed of the image recognition process, the measurement data can be evaluated in real-time. Thus, the prerequisite for controlling the scarfing process can be fulfilled, and the goal of automating the process is much closer,” explains Dr. Peter Jäschke, Head of the Composite Group at the LZH. A further advantage of laser processing, as compared to conventional processing, is that the laser is force-, contact- and wear-free.

Durable components for a better eco-balance
The goal of the project partners LZH and the Apodius GmbH is to repair defects in FRP workpieces more cost-efficiently. Thus, the replacement of parts can often be avoided. “For the manufacturers, this means saving time and costs. And the longer the lifetime of a component, the better the ecological balance and the resource-efficiency is,” says Dr. Dietmar Kracht, Executive Director of the LZH.

The project „Optical measurement of the fiber layer orientation for controlling a precise, laser-based FRP repair“ (ForLase) is funded by the German Federal Ministry for Economic Affairs and Energy (BMWi) within the framework of the Central Innovation Program SME (ZIM) for a duration of two years.

There is one figure for this press release.