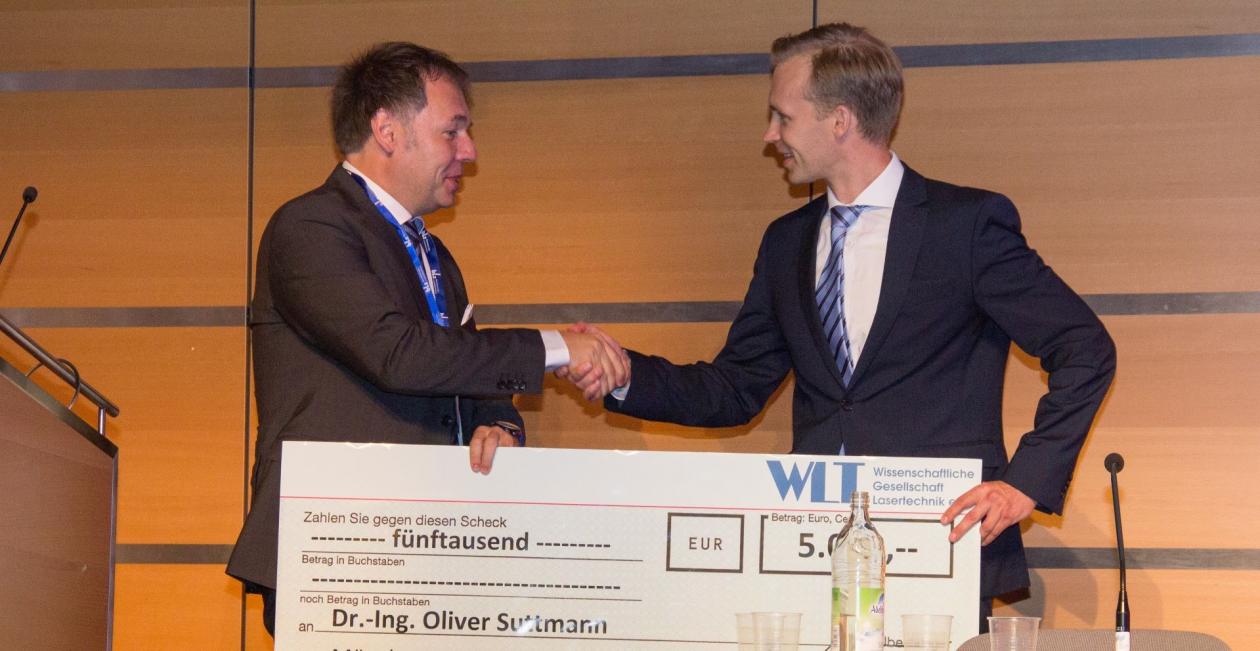 Dr.-Ing. Oliver Suttmann, Head of the Production and Systems Department at the Laser Zentrum Hannover e.V. (LZH), received the Prize of the Wissenschaftliche Gesellschaft Lasertechnik e.V. (WLT). Alongside the Lasers in Manufacturing Conference (LiM) 2017 in Munich, WLT president Prof. Dr.-Ing. Michael Schmidt handed over the award.

The WLT Prize is awarded annually for outstanding accomplishments in the field of applied laser research. Dr.-Ing. Oliver Suttmann was honored for his contribution in the fields of fiber composite, glass and micro processing.

„Already in his PhD thesis, Oliver Suttmann has proven his ability to address and solve complex challenges in manufacturing technology on a scientific basis. Now, he is successfully using this ability while heading a fully third-party funded department , and thus promoting the scientific further development in the field of laser material processing”, explains Prof. Dr.-Ing. Michael Schmidt in his laudatory speech.

„Only in an extraordinary environment, a single human being becomes an extraordinary tool. In Hannover, the institutions have built such an environment. The close connection between the LZH and the Produktionstechnisches Zentrum Hannover and the Hannoversches Zentrum für Optische Technologien offers optimum conditions for this”, says Dr.-Ing. Oliver Suttmann in his acceptance speech, and added: “In particular, the collaborative research centers (SFB) 653, Gentelligent Components, and 123, Planar Optronic Systems, are the basis for a wide-ranging and productive cooperation.”

About Dr.-Ing. Oliver Suttmann
Dr.-Ing. Suttmann studied mechanical engineering at the University of Rostock and at the Leibniz Universität Hannover and received his engineer diploma in 2007. In 2013, he received his PhD from the mechanical engineering department (production technology) at the Leibniz Universität Hannover. His PhD thesis about the topic “Laser processes for the structuring of thin-film strain gauges made of metal” was honored with the Schaeffler Innovation Award. Since 2007, Dr.-Ing. Suttmann has been working at the LZH, since 2013 as the Head of the Production and Systems Department.

About the WLT Prize
The WLT Prize is awarded annually to young research talents for outstanding accomplishments in the field of applied laser research. The Wissenschaftliche Gesellschaft Lasertechnik e.V. focuses on the scientific further development of laser radiation as a universal “tool”, and on opening up new interdisciplinary fields of application in optical technologies. The award is endowed with a prize money of 5,000 €.