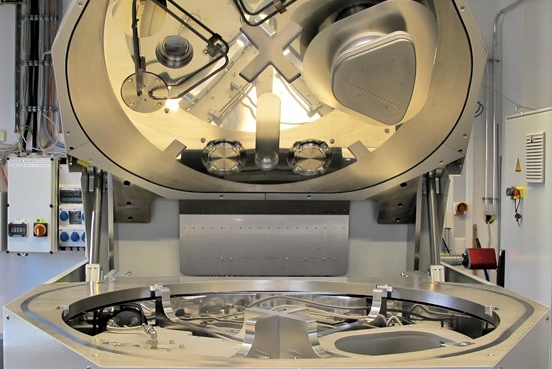 With a new Spatial ALD system, the LZH can now also uniformly coat complex-shaped optics. The innovative system achieves higher deposition rates than previously possible - and is of interest, among others, for applications in the automotive lighting or VR/AR sectors.

ALD (atomic layer deposition) technology can produce very thin, high-quality coatings. So far, the ALD process has been used primarily to produce thin functional layers in the semiconductor industry, for example. The new Spatial ALD system of the LZH, which was developed in cooperation with the company Beneq, now makes another application that is in high demand in industry economically viable. The scientists in the Optics Integration group at the LZH can use it to produce layer systems of uniform thickness much faster than before, for example on strongly curved and structured optics. Previously used methods, such as electron beam evaporation or ion beam sputtering, are severely limited in this respect.

Exciting use cases: Curved displays or lighting elements
The Spatial ALD system achieves high deposition rates in the production of ultra-thin coating systems for optics and enables the uniform coating of complexly shaped surfaces. This is of interest, for example, in the fields of automotive lighting or augmented reality (AR)/virtual reality (VR), where three-dimensionally shaped lighting elements are essential. As the system is plasma-based, it can operate with low temperatures below 100 degrees - making it particularly suitable for coating temperature-sensitive polymer optics, which are often used for displays.

The rotation principle enables high deposition rates
The system was developed by the Finnish company Beneq, a leader in ALD technology, in collaboration with the LZH. The ALD process is based on self-limiting chemical reactions between gaseous precursors and substrate surfaces. In systems commonly used at present, the process reactions are carried out one after the other, which necessitates a time-consuming gas exchange of the entire reaction chamber. This is different in the Spatial ALD system at the LZH: Here, the process cycles take place spatially separated. The system has four individual process chambers separated by pressure and nitrogen, in each, an ALD reaction step is completed. The substrates then rotate into the next chamber. In this way, the scientists achieve deposition rates that were previously only possible with other coating processes. This makes the process particularly economical and at the same time enables high throughput in optical coating.

System interesting for research and industrial customers
The scientists presented their first research results with the new system in a conference contribution at this year's Photonics West. They are also currently working in the EUROSTARS collaborative project INTEGRA to coat optical diffraction gratings using the Spatial ALD system.

In addition, the LZH is open to new challenges with the Spatial ALD system in the context of further industry and research collaborations.